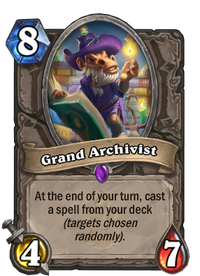 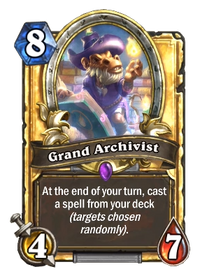 At the end of your turn, cast a spell from your deck (targets chosen randomly).

Grand Archivist is an epic neutral minion card, from the Kobolds & Catacombs set.

Grand Archivist can be obtained through Kobolds & Catacombs card packs, or through crafting.

This card can be used best to cast non-targeted, high-cost spells, to ensure that its impact is positive rather than negative. Priest, for example, has Free From Amber, Druid has Survival of the Fittest, while Hunter has Call of the Wild.

Since its effect happens at the end of the turn, spells such as Call of the Wild will be slightly worse since you aren't able to immediately take advantage of Huffer's Charge or Leokk's buff.

This card works in decks running only big spells with Spiteful Summoner, Raven Familiar, and Dragon's Fury, which work better with expensive spells.

Summon
Oh, what's this one do!
Attack
Fireball!
Effect triggering
I try this.