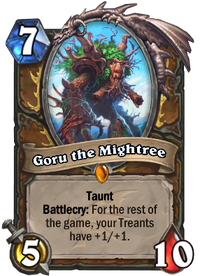 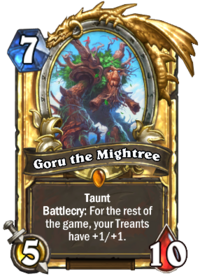 Taunt
Battlecry: For the rest of the game, your Treants have +1/+1.

Goru the Mightree is a legendary druid minion card, from the Descent of Dragons set.

Goru the Mightree can be obtained through Descent of Dragons card packs, through crafting, or as an Arena reward.

Goru the Mightree is a 10-health Taunt minion who can not only disrupt enemy attacks, but also strengthens your summoned Treants, making him a valuable asset in Treant decks. His cost and attributes are identical to an Ancient of War played with the Rooted option, but Ancient of War's increased health and Taunt are only tied to its Choose One ability, whilst Goru has these innate traits even if he enters the battlefield through unconventional means. Goru's effect can stack, so you can return him to your hand or use Flobbidinous Floop to copy him, making your Treants even stronger. 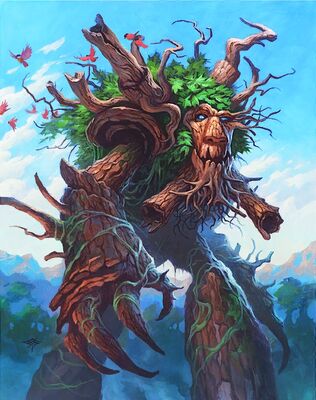