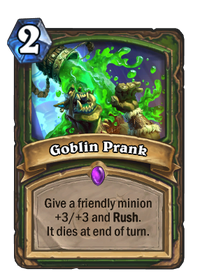 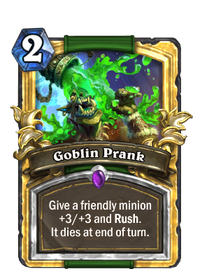 Goblin Prank is a epic hunter spell card, from The Boomsday Project set.

Goblin Prank can be obtained through The Boomsday Project card packs, or through crafting.

Goblin Prank is comparable to the Warlock card Power Overwhelming, but the target can attack minions immediately (and presumably dies in a less horrible manner). Each aspect of this card (Rush, Buff, Destroy) can be utilized in a different manner. Rush allows you to dictate trades, with the added stats allowing you to make more efficient trades, especially if the minion were to die in the trade anyways. Destroying the target is useful in strong Deathrattle minions such as Rat Pack and Mechanical Whelp, as well as for activating Scavenging Hyena and similar cards.

With the help of Galvanizer, Goblin Prank is a one-card activator for Mecha'thun.

Could also be used on Nerubian Egg or Serpent Egg to get a huge control and damage lead on your opponent.