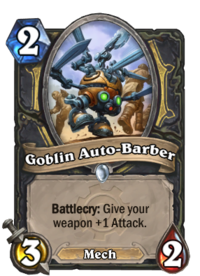 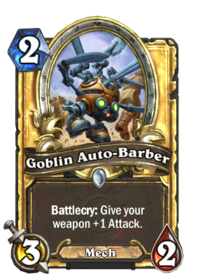 Battlecry: Give your weapon +1 Attack.

This guy is excellent at adjusting your haircut and/or height.

Goblin Auto-Barber is a common rogue minion card, from the Goblins vs Gnomes set.

Goblin Auto-Barber can be obtained through Goblins vs Gnomes card packs, or through crafting.

A weaker version of Naga Corsair but allows you to play at earlier turns due to its cheap cost. This minion has obvious early synergy with the Wicked Knife granted by the rogue hero power Dagger Mastery, turning it into a formidable weapon for early-game clearing or AoE with Blade Flurry.

Applying the buff to a weapon with higher durability, such as Assassin's Blade, will make the buff even more valuable and efficient.