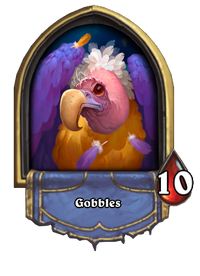 Gobbles is a boss that can be encountered during the Monster Hunt.

Gobbles plays an aggro Beast deck. Because you start the game with just 10 Health, it is possible for him to rush you down and kill you, so early 1 or 2-drops are essential.

Although Gobbles looks intimidating, you are not required to rush him down faster than him. You can simply keep killing his beasts until he runs out of cards in his deck and starts dying from Fatigue damage.

Gobbles' minions are extremely weak and can be easily overwhelmed with cards such as Redband Wasp, Cruel Taskmaster or Lowly Squire. However, the easiest way to deal with Gobbles is firing the cannon on his minions while building a board.

Houndmaster Shaw has many minions designed to answer to whatever Gobbles throws at you. Your best hopes of winning require you to play a perfect curve, so avoid skipping a turn. Once more of your minions are on the board than Gobbles', you can start going face. Avoid rushing him as you may not have enough burst before he takes you down.

Since Toki relies on randomness, avoid giving the boss a weapon or a spell. Start by dropping minions on the board and rewind time if necessary. As long as you have a board to deal with his minions and deal damage to the boss, you won.

Gobbles is slow and can be easily defeated by rushing him down with Sinister Strike and your hero power. Use your other minions to kill some of the boss' minions while also keeping the pressure and adding minions on the board when available.

Gobbles is unique to Hearthstone. It is evidently a vulture.

Vultures are carrion birds that can be found throughout the drier areas of Kalimdor — seeking carnage upon which to feed. The mottled scavengers have been known to aid the vile harpies from time to time — drawn by the promise of freshly slain flesh and blood. They have also been seen in Outland, but with two heads.