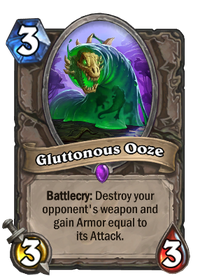 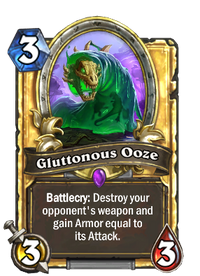 Battlecry: Destroy your opponent's weapon and gain Armor equal to its Attack.

Gluttonous Ooze is an epic neutral minion card, from the Journey to Un'Goro set.

Gluttonous Ooze can be obtained through Journey to Un'Goro card packs, or through crafting.

A cheap situational card, since the opponent has to have a weapon for Gluttonous Ooze's effect to occur. Similar to Acidic Swamp Ooze, Gluttonous Ooze has the same effect of destroying the opponent weapon, but also gives you armor based on the weapons attack. The armor makes it an especially powerful tech card against aggressive decks with weapons.

Glutinous Oozes are mobs that can be found in Un'Goro Crater in World of Warcraft. Despite the slightly different name, these are probably meant to be the same creature.