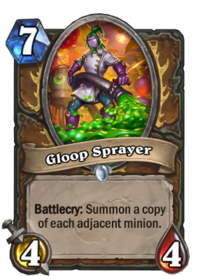 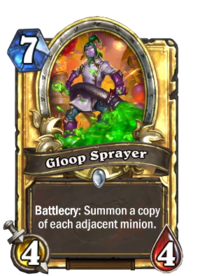 Battlecry: Summon a copy of each adjacent minion.

Gloop Sprayer is a common druid minion card, from The Boomsday Project set.

While this card acts like a more efficient Faceless Manipulator, its very high mana cost and requiring at least two minions to make its effect worthwhile is generally overkill and is difficult to play unless cost reduction effects like Dreampetal Florist is used.

This card can be used Malygos-based combo decks to duplicate Malygos, which already requires significant cost-reducing effects to pull off the combo. After creating a second copy of Malygos, play Gloop Sprayer for +20 Spell Damage.

Summon
They grow up so fast!
Attack
You're compost!