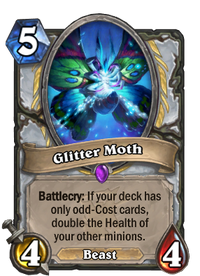 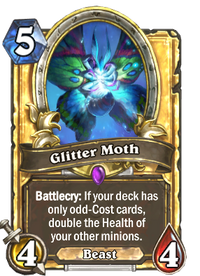 Battlecry: If your deck has only odd-Cost cards, double the Health of your other minions.

Glitter Moth is a epic priest minion card, inducted into the Hall of Fame set, formerly from The Witchwood set.

Glitter Moth can be obtained through crafting only.

This card is best used in decks that utilize Baku the Mooneater, as the two compliment each other for both requiring an Odd-only deck. Odd minions with high health that work well with Glitter Moth include Northshire Cleric, Injured Blademaster and Quartz Elemental. While Divine Spirit can't be used in an odd-style deck, Inner Fire can, which can lead to lethal combos with Glitter Moth's Battlecry.

However, it is worth considering that Combo Priest tends to be a controlling type deck. Without Spirit Lash, Divine Hymn, or the two very important Un'Goro cards Shadow Visions and Radiant Elemental, this sort of deck has much less anti-aggro options than a traditional one and is more reliant on the upgraded Heal Hero Power to stay alive.

The Witchwood's growing influence drives even the redoubtable citizens of Gilneas to fearful flights of fancy. Uneasy townsfolk share bizarre stories of black cats with knowing eyes, and giant moths that peer into windows during the dead of night. Stranger still, they all seem to share the same horrid dream, night after night: a feeling of unspeakable dread as they watch huge, spectral fangs devour the moon.[1]

Commentary: As they were complementary to the Even-Odd mechanic that Baku and Genn introduced, Gloom Stag, Black Cat, Glitter Moth, and Murkspark Eel will also join the Hall of Fame.