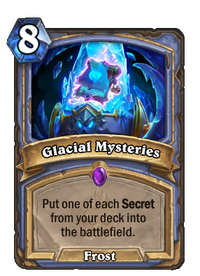 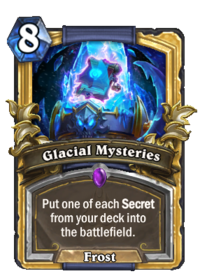 Put one of each Secret from your deck into the battlefield.

The secret is in the frosting.

Glacial Mysteries is an epic mage spell card, from the Knights of the Frozen Throne set.

Glacial Mysteries can be obtained through Knights of the Frozen Throne card packs, or through crafting.

This card directly puts Secrets from your deck into play, which means with 3 or more unique Secrets it's more efficient for its cost and thins out your deck.

Unfortunately, this card has some major flaws. Unlike Mysterious Challenger, this card doesn't come with a body and offers zero board advantage, which means you are effectively doing nothing for 8 mana. Another issue is the synergy among Mage Secrets themselves: Mage Secrets are focused on disrupting tempo or adding survivability rather than board control, and many Mage Secrets have trigger conditions that overlap with each other, so even if you have multiple Secrets up, at 8 mana it's far too slow for its effect to have enough of a disruptive impact.