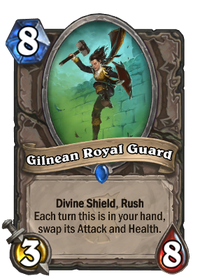 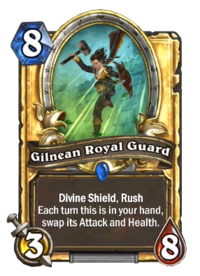 Divine Shield, Rush
Each turn this is in your hand, swap its Attack and Health.

Admittedly, they kind of dropped the ball with Prince Liam.

Gilnean Royal Guard is a rare neutral minion card, from the The Witchwood set.

Gilnean Royal Guard can be obtained through The Witchwood card packs, or through crafting. 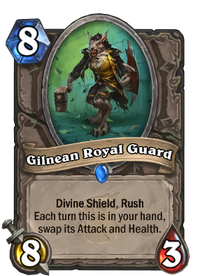 With 8 Attack and Rush, this minion can effectively destroy most other high-cost minions in Worgen form while staying alive thanks to Divine Shield, but is easily removed afterwards. In human form, it's able to destroy smaller threats and has a lot of Health to stick to the board, but somewhat wastes its Divine Shield. In Arena, it's a highly effective at countering big minions and gaining tempo over them if it can be protected. Its use is more limited in constructed play due to its extreme stat variance and high cost and more effective removal effects. With Lady in White, however, it will turn into an 8/8 that can be played on any turn, removing its biggest weaknesses.

Summon
My duty is to the king.
Attack
For the king!