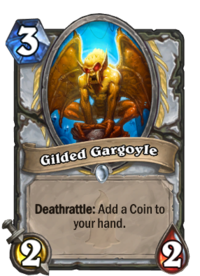 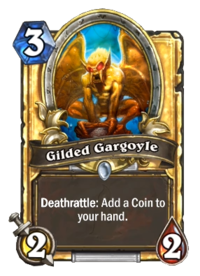 Deathrattle: Add a Coin to your hand.

You hear a coin rattling inside the slotted gargoyle... What could it mean?

Gilded Gargoyle is a common priest minion card, from the Kobolds and Catacombs set.

Gilded Gargoyle can be obtained through Kobolds & Catacombs card packs, or through crafting.

Gilded Gargoyle has average synergy with both spell- and Deathrattle- oriented Priest cards. The Deathrattle attribute gives it synergy with Awaken the Makers and Twilight's Call, while the Coin works well with all spell synergystic cards. However, its low power level and impact leaves it overshadowed by more effective cards, such as Tortollan Shellraiser for Deathrattle or Thoughtsteal for spells.

It has found a home in some Highlander Priest decks, since Shadowreaper Anduin's Hero Power can get activated off of the minion and the coin.

Gargoyles were brought to Lordaeron from the frozen Northrend by Arthas's armies for the siege of Silvermoon. Now, gargoyles live in the Eastern Plaguelands and the Ghostlands. These strange, wiry flyers have rough, crystalline hides which protect them from all manner of attacks.

Gargoyles make effective scouts and can be deadly if left to rain attacks from the air, but they have a very obvious weakness. Most of them have to go through long periods resting as stone to maintain the energy they need to carry their heavy bodies through the air. In times of great peril, gargoyles also land and condense their crystalline hides into a stone-like surface to make themselves nearly impervious to any form of attacks. Though they are unable to attack in this state, they can take time to regenerate their wounds and replenish their energies.

The grotesque is a smaller gargoyle used to divert the flow of rainwater on Scourge buildings to prevent mausoleum flooding. There are also gargoyles affiliated with the Twilight's Hammer and the Old Gods. It is unknown if these are related to the Scourge gargoyles or if they have been created by the Old Gods.

The concept of a gilded gargoyle is unique to Hearthstone.