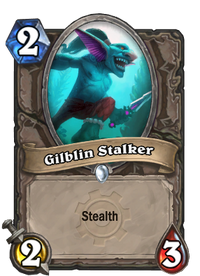 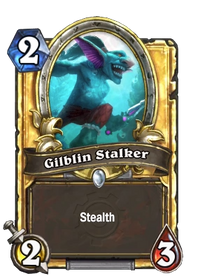 "Shhh, I think I hear something." "Ah, it's probably nothing." - Every Henchman

Gilblin Stalker is a common neutral minion card, from the Goblins vs Gnomes set.

Gilblin Stalker can be obtained through Goblins vs Gnomes card packs, or through crafting.

Since it has 3 health the Gilblin Stalker can survive most AoE effects and act on your next turn. This makes it useful if you want to cast buff spells, especially on round 3 or 4.

The threat of a Stealthed 2/3 minion on the table can deter your opponent from playing high value minions like Knife Juggler or Whirling Zap-o-matic.

The gilgoblins, sometimes called gilblins, gill goblins, or water-goblins, are a species of aquatic goblin created by Hobart Grapplehammer. They were first introduced into the game with the World of Warcraft: Cataclysm expansion.

The adaptations that allow gilgoblins to survive the aquatic life has apparently drained some of their higher brain functions and their actions are guided almost entirely by greed. They are most often seen stealing things.

Gilgoblin's live in big clams, which they decorate with their new-found treasure, including cannons, cannonballs and other things.

Gilblin Stalkers are gilblins found on the shoreline of the Swamp of Sorrows in the Eastern Kingdoms. However, the art for this card appears to depict Vashj'ir.