Gift of the Legion

From Hearthstone Wiki
Jump to: navigation, search
Gift of the Legion
Regular 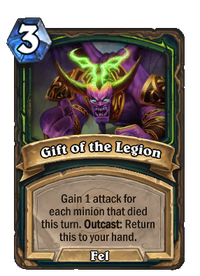 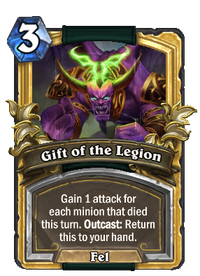 Gain 1 attack for each minion that died this turn. Outcast: Return this to your hand.

The Legion can offer you everything...for a price.

Gift of the Legion is an uncollectible demon hunter spell card that only appears in Duels. It is one of demon hunter's Signature Treasures.

Gift of the Legion can be unlocked by collecting 15 unique Scholomance Academy Epic Cards. Once unlocked, it can be added to a starting Duels demon hunter deck.

Gift of the Legion is uncollectible and unavailable in any Constructed or Arena game.

This card is played either as a finishing tool that usually deals 10 to 20 damage, and the extra damage when the battle is not near the end. It shows itself best with Line Hopper, Sticky Fingers, or Khadgar's Scrying Orb in the deck. Mask of Mimicry, Ancient Reflections, or Banana Split may be used to copy Line Hopper. Alternatively, Mask of Mimicry or Ancient Reflections may be cast on the enemy minions like Sorcerer's Apprentice.

Having at least three cards that reduce the cost of spells will allow to play Gift of the Legion an unlimited number of times per turn.

Aggro decks are most relevant to make good use of Gift of the Legion; AoE like Immolation Aura, Coordinated Strike, or Command the Illidari are also may be useful for OTK. The aggressive deck consisting of many small minions will not only make it easier to move Gift of the Legion to the far left or right position, but also increase the guarantee of having the minions on the player's board that can quickly die to activate Gift of the Legion.