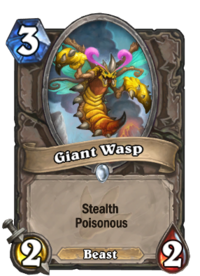 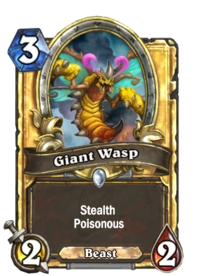 Giant Wasp is a common neutral minion card, from the Journey to Un'Goro set.

Giant Wasp can be obtained through Journey to Un'Goro card packs, or through crafting.

This is a simple minion that can be used to trade up with higher value targets. It's especially good at taking out large Taunts like Tar Lord. It can be compared to Patient Assassin, but is much harder for your opponent to kill since the difference between one health and two health is quite extreme.

Wasps are an arthropod type found on Azeroth, and other places. They are stinging insects. Wasp species of various sizes can be summoned by certain arcane casters to attack their enemies. A wide variety of silithid wasps are found on Azeroth all over Kalimdor.