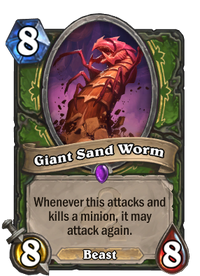 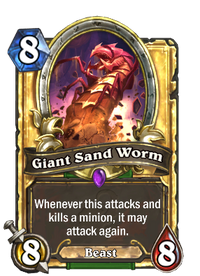 Whenever this attacks and kills a minion, it may attack again.

Banned from every all-you-can-eat buffet on Azeroth.

Giant Sand Worm is an epic hunter minion card, from the Whispers of the Old Gods set.

Giant Sand Worm can be obtained through Whispers of the Old Gods card packs, or through crafting.

This minion is capable of both removing multiple minions barring the strongest ones while dealing a significant amount of face damage if left standing.

In conjunction with Bestial Wrath or Stablemaster you can use Giant Sand Worm to clear your opponent's board of minions in a single turn.

In Arena it is a decent late game minion. Usually it can kill 2-3 minions, allowing you to gain some control of the field.

Sand worms are huge worm-like creatures found on both Azeroth and Outland. These worms have burrowing claws growing from the upper body that enable the beasts to dig through most kinds of soil with frightening speed, often surprising unwary prey by bursting up through the ground beneath the creature and killing it with its sharp beak-like mouth. Often times they can be spotted due to the rumbling of the ground above them. Young sand worms seem to be unable to tunnel and also lack the characteristic claws.

The massive worm Ouro was the first sand worm to be encountered by the heroes of Azeroth, but more and more have since appeared throughout the world. Residing in the Temple of Ahn'Qiraj, Ouro is rumored to have been created by the Old God C'Thun himself as a mockery of life. 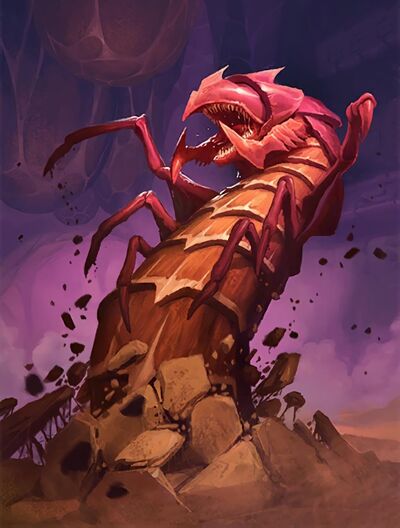