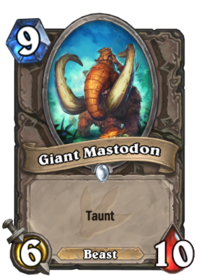 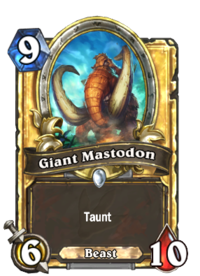 Still salty about it not being the "Year of the Mastodon."

Giant Mastodon is a neutral common minion card, from the Journey to Un'Goro set.

Giant Mastodon can be obtained through Journey to Un'Goro card packs, or through crafting.

Giant Mastodon is a very powerful taunt minion, similar to Bog Creeper. Although weak to hard removal, if this minion remains on the board it can be devastating for your opponent, often taking out multiple minions on the board. This type of minion is most valuable in the Arena game mode.

While mammoths are previously known to exist in Northrend, the Giant Mastodon represents the first time that a mastodon - a distant relative of mammoths and elephants - has appeared in Warcraft.