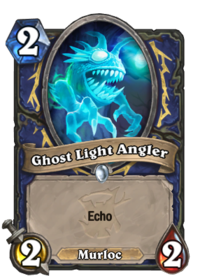 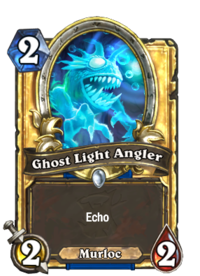 Ghost Light Angler is a common shaman minion card, from the The Witchwood set.

A fairly standard Echo minion that can fill the board on its own, giving it great synergy with cards like Murloc Warleader and Murloc Tidecaller. Ghost Light Angler also has excellent synergy with Hagatha the Witch's Bewitch hero power or Underbelly Angler, generating lots of spells off of one card. It can also work well with Unite the Murlocs, although this requires a lot of mana.

Deep sea murlocs, also called deep murlocs, are a species of anglerfish-like murloc that lives in the ocean depths, in locations such as Vashj'ir and the Throne of the Tides. They possess long, sharp fangs and phosphorecent antennae which they use to lure fish out of the reeds. Larger individuals hunt for fish in the kelp, while the smaller ones practice some kind of magic.