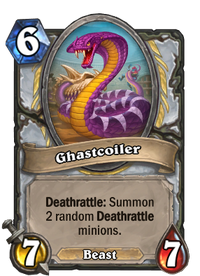 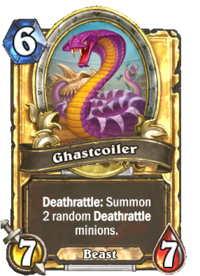 Ghastcoiler is a Tier 6 minion in the Battlegrounds game mode. 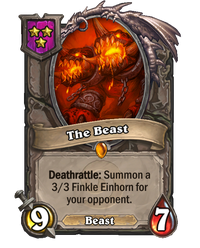 Place this minion near the right of your board so that it will have room to spawn minions. Baron Rivendare doubles the number of minions summoned from Ghastcoiler's Deathrattle, not only putting a substantial amount of stats on the board but also potentially giving a lot of extra face damage if it dies at the end of the round. Rivendare can double the Deathrattles of the summoned minions as well.

Place this minion near the left of your board for beast (Gol'drinn), dragon (Nadina the Red), or murloc builds (Sneed's old Shredder into King Bagurgle) so that deathrattles like Nadina the Red, Spawn of N'zoth, Gol'drinn and Selfless Hero have more available targets. For mech builds, try to put ghastcoiler near the right, so that if Kangor's apprentice is summoned, other mechs die first.