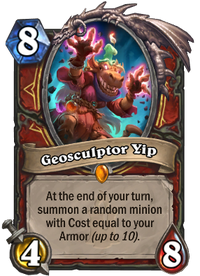 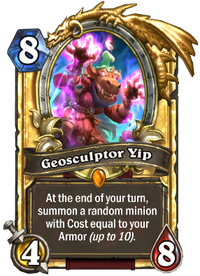 At the end of your turn, summon a random minion with Cost equal to your Armor (up to 10).

Once crafted a gauntlet out of earwax and pure ambition.

Geosculptor Yip is a legendary warrior minion card, from the Kobolds and Catacombs set.

Geosculptor Yip can be obtained through Kobolds & Catacombs card packs, or through crafting.

Adding large amounts of armor often leads to one finding oneself in situations where the consequences of Yip's actions could be described as "dope".

It's not advisable to play Geosculptor Yip on turn 8 unless the player has already managed to gain a lot of armor. It should instead be saved until it can be comboed with cards like Iron Hide, Bring It On! or Drywhisker Armorer.

The nature of Geosculptor Yip leads to the opponent often having to use multiple removals on it. Because of this it fits in fatigue decks that aim exhausting the opponent's resources. This makes Yip a good target for Dead Man's Hand, which can add extra value. Another Yip can then be played after your opponent has exhausted their removal.

Attack
Ah! You no shiny!

Yip is unique to Hearthstone. Kobolds have previously been known to possess some amount of skill in earth-based magic, but the title of "Geosculptor" is also a new invention.