For The Dalaran Heist hero, see George the Fallen.

George the Fallen is a hero that the player can pick in the Battlegrounds game mode. 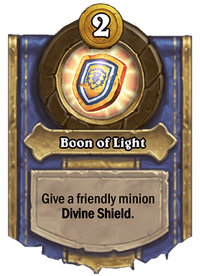 George's Hero Power is extremely costly and geared towards endgame builds. While very expensive, giving a minion the ability to survive an extra hit is incredibly valuable in the late game. Huge attackers like a Cave Hydra, big Taunt minions, and support minions like Baron Rivendare will all benefit considerably from them. George suffers from a weak early game, so focus on ramping early so that you can survive to make use of his Hero Power later.

One opponent to watch out for is Nefarian, whose Hero Power destroys all Divine Shields at the start of the round. George is at a serious disadvantage against Nefarian, so focus on eliminating him as fast as possible.