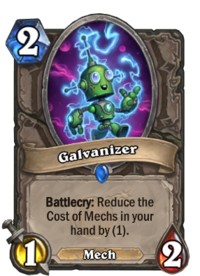 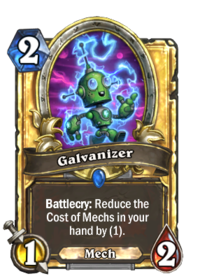 Battlecry: Reduce the Cost of Mechs in your hand by (1).

Also known as a power zinc.

Galvanizer is a rare neutral minion card, from The Boomsday Project set.

Galvanizer is often used to accelerate Mech-based decks. It's especially strong following up on a Crystology, or just a hand full of Mechs. Galvanizer works nicely with Magnetic cards, making them easier to combine in a single turn. Galvanizer is comparable to Mechwarper. While it has worse stats for its cost, it has the added benefit of granting a permanent cost-reduction effect that is not dependent on keeping Galvanizer alive on the board.

Galvanizer is helpful to assist in triggering Mecha'thun, reducing its cost and making it far easier to combo the Deathrattle.