Galakrond is a hero that the player can pick in the Battlegrounds game mode. 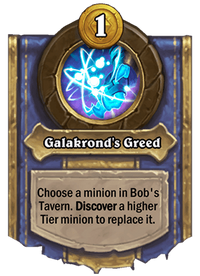 Although Galakrond's Hero Power looks awfully similar to Infinite Toki's, one advantage Galakrond has over her is that you can continuously upgrade the transformed minion on the next turn after if it was Frozen. You can either upgrade the minion you upgraded last turn immediately for a minion 2 tiers higher to optimize your rolls, or continue to keep freezing it to go even higher. However, the latter is more risky since you will have to rely entirely on your starting roll each turn to fill out your warband in the meantime. You can also simply use the Hero Power to reroll a minion into a likely stronger one.