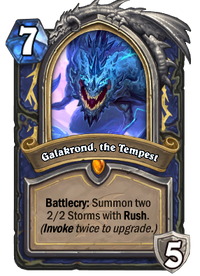 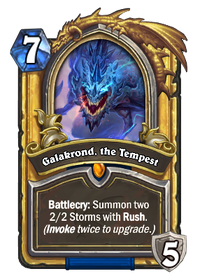 Hagatha cried out over the winds: "Truly, you are as powerful as the Maelstrom!" To which the Tempest answered: "I AM THE MAELSTROM."

Galakrond, the Tempest is a legendary shaman hero card, from the Descent of Dragons set. 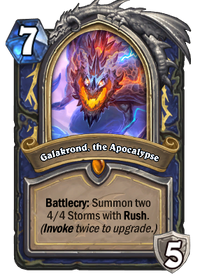 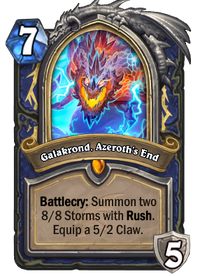 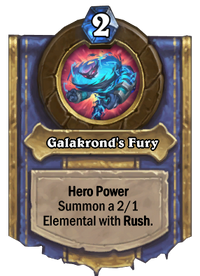 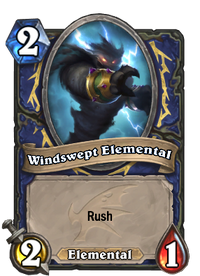 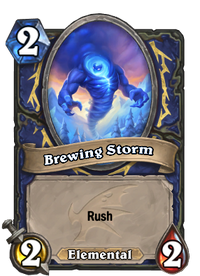 Galakrond's Invoke effect is quite powerful on Shamans; summoning a 2/1 with Rush makes it very versatile in almost any situation and lets them contest the board fairly well throughout the game. Due to Shaman possessing a double Invoker in Corrupt Elementalist, Galakrond, the Tempest can upgrade more easily than other Galakronds. On top of that, Dragon's Pack makes for a powerful midrange card for Galakrond Shaman. His Battlecry creates a big tempo swing with huge Rush minions, making his midgame even more oppressive.

Galakrond, the Tempest is particularly powerful as a finisher for Quest Shaman decks using Corrupt the Waters. Not only does the quest reward, Heart of Vir'naal, allow Corrupt Elementalist to instantly upgrade this card to its final form, but it can also double Galakrond's own Battlecry, flooding the board with four 8/8 Rushes. This will almost assuredly clear the board and threaten lethal with an enormous 37 damage on the next turn. On top of this, in Wild, Shudderwock can repeat Galakrond's Battlecry to add a second wave of 8/8 Rush minions.

Summon
The oceans churn, and the heavens cry!

This version of Galakrond is one of five forms he takes in Descent of Dragons, each catering to a League of E.V.I.L. member. This incarnation of Galakrond was reanimated by Swampqueen Hagatha. As Hagatha is a shaman, Galakrond the Tempest surges with raw elemental power. 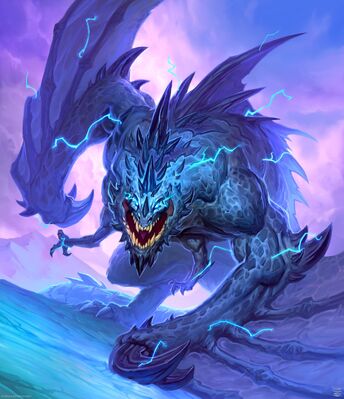