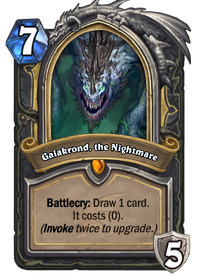 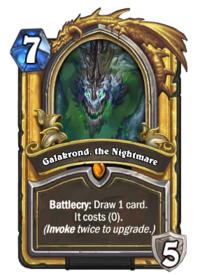 Galakrond, the Nightmare is a legendary rogue hero card, from the Descent of Dragons set. 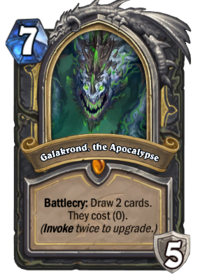 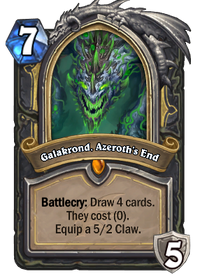 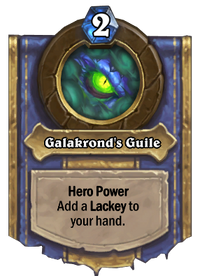 Galakrond, the Nightmare is best used in a Tempo Rogue deck looking for a source of value. One of the major weaknesses of Galakrond, the Nightmare compared to other versions of Galakrond is the weakness of Rogue's Invoke cards. As such, The Nightmare isn't the best card to build around, but is decent as a mid to lategame play to close games out. Thankfully, his Battlecry is reasonably strong at all three stages, meaning you don't have to wait until he's fully Invoked to play him. His relative splashability makes him and his support cards a good choice for filler in a Highlander build.

Paying three mana for a Lackey is not very efficient. However, the Lackeys can be stored and saved to trigger Combos or build a large Edwin VanCleef, meaning it's still a good idea to use the Hero Power every turn where possible.

The constant Lackey generation from his Invoke and Hero Power make Heistbaron Togwaggle very useful throughout the game.

His Battlecry has great synergy with Transmogrifier, giving you up to four random Legendary minions that cost (1).

This card also has good synergy with Edwin Vancleef, especially after Invoking or using your Hero Power in addition to its Battlecry.

This version of Galakrond is one of five forms he takes in Descent of Dragons, each catering to a League of E.V.I.L. member. This incarnation was reanimated by King Togwaggle. Fitting for a rogue, Galakrond the Nightmare appears to have venomous teeth and claws, and his quotes/emotes imply he has power over darkness and fear. His other forms are as follows: