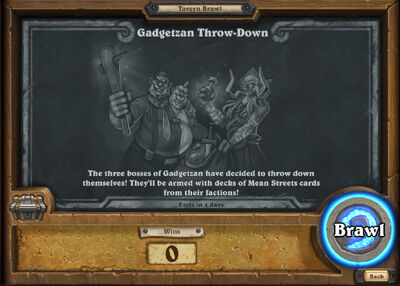 Not to be confused with the brawl The Battle for Gadgetzan.

"The three bosses of Gadgetzan have decided to throw down themselves! They'll be armed with decks of Mean Streets cards from their factions!"

Gadgetzan Throw-Down is a Tavern Brawl. It made its debut on March 1, 2017.

This Brawl sees players doing battle in the roles of three special heroes - Aya Blackpaw, Don Han'Cho and Kazakus - each has its own Hero Power and semi-randomised premade deck, based on the leader's faction mechanic (Jade Golems, Hand-buffs and Potions respectively).

Matches take place on the Mean Streets of Gadgetzan battlefield.

The bosses and Hero Powers for each boss are listed in the following table. Full deck lists can be found in the sections below.