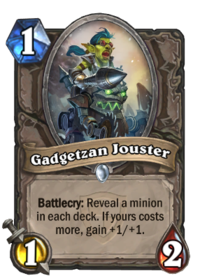 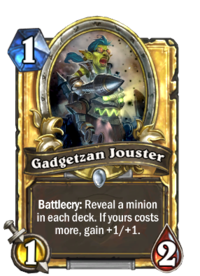 Battlecry: Reveal a minion in each deck. If yours costs more, gain +1/+1.

It's not HER fault you didn't put a spinning saw blade on your horse.

Gadgetzan Jouster is a common neutral minion card, from the Grand Tournament set.

Gadgetzan Jouster can be obtained through The Grand Tournament card packs, or through crafting.

If you win the Joust, statwise you are getting a Zombie Chow without its unfortunate Deathrattle. With 3 Health, it is possible to heal it after it takes damage, keeping it on the board a bit longer. You can also just play Gadgetzan Jouster to see one of your opponent's card, and try to determine which style of deck they play. This is usually most useful in the early game. If you lose the Joust, this card is just a plain 1/2 for 1 mana which is very poor. Unless you are confident about winning Jousts regularly it is usually better to run Zombie Chow.

Gadgetzan is a goblin-run town in Tanaris. Among its many denizens is the Gadgetzan Auctioneer.

Rising out of the northern Tanaris desert, Gadgetzan is the capital of the Steamwheedle Cartel the largest of the Goblin Cartels. Although it used to be surrounded by desert, since the Shattering it is now a prime beachfront property. Some of the best goblin engineers, miners and alchemists ply their trade here. The goblins believe in profit above loyalty, thus Gadgetzan is considered neutral territory in the Horde/Alliance conflict. Anyone with a fat wallet or services to offer is welcome in Gadgetzan. Both governments officially recognize goblin neutrality, and for those who don't, the streets are heavily patrolled by goblin bruisers ready to pound to a pulp anyone disrupting their trade by instigating conflict.