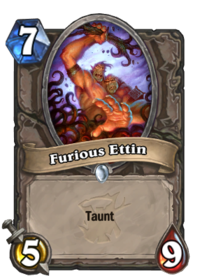 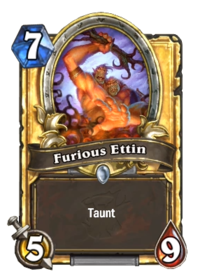 One head is a morning person. The other head hates morning people.

Furious Ettin is a common neutral minion card, from the The Witchwood set.

Furious Ettin can be obtained through The Witchwood card packs, or through crafting.

In Standard, the Furious Ettin is comparable to the Amani War Bear, trading the beast tribe and rush attribute for 2 more health. While this makes Amani War Bear better in aggressive decks, Furious Ettin is more at-home in defensive or Priest decks, who can increase its potency with buffs like Inner Fire, and healing its large HP pool to keep it in the game longer. Unlike similar high-health high-cost minions, this minion's 5 attack means it can deal with several opposing mid-sized minions before going down. Ancient of War is almost strictly better than Furious Ettin, as it can choose to be a 5/10. The only downsides to using Ancient of War is that it is vulnerable to Silence, and cannot be resurrected by Hadronox.

Furious Ettin can be very effective in Arena due to its favourable stat distribution; it can remove multiple minions, resulting in a card advantage for you. Even when killed with hard removal, you still gain advantage as you know that opponent has one less removal for the rest of the game.

Ettins are a race of two-headed giants found in several highland areas around the Eastern Kingdoms, mostly in the Twilight Highlands, the Redridge Mountains and the hills and forests of Gilneas and Silverpine. They are also found in Highmountain on the Broken Isles.

The ettins of Silverpine came from Gilneas, and now wander the land searching for their next juicy meal, though the Forsaken have managed to subjugate and utilize some of them to haul their wagons throughout the forest. Many ettins have also been enslaved or recruited by the Twilight's Hammer cult.

The ettins of Highmountain seem to operate under some sort of hierarchy above their already existing tribal network, as Hill Prince Urgo, like his father before him, was destined to be the lord of all the hill ettin tribes in Highmountain. They build armor from stolen Gilneas houses and Suramar ruins, and some forge their own armor. The ettin of Highmountain eat tauren that have been cooked over bonfires.