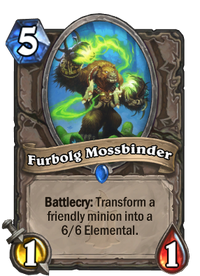 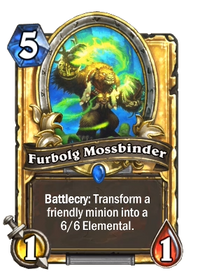 Battlecry: Transform a friendly minion into a 6/6 Elemental.

Behold, the unstoppable power of MOSS!

Furbolg Mossbinder is a rare neutral minion card, from the Kobolds & Catacombs set.

Furbolg Mossbinder can be obtained through Kobolds & Catacombs card packs, or through crafting. 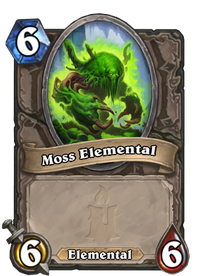 Given that the smallest minion possible is 0/1, the highest amount of stats this card can provide is +6/+5. As getting the maximum value from the effect is highly conditional, it should be tried to gain value by some other means. This could include getting rid of a negative effect on the transformed minion. A perfect target for Evolve.

Summon
By root and vine, your soul entwine!
Attack
Entangle!