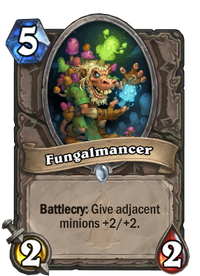 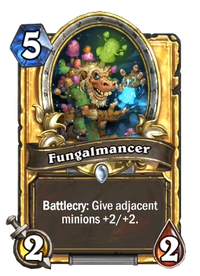 Fungalmancy is the easy major for those who can't cut it at Waxmancy.

Fungalmancer is a common neutral minion card, from the Kobolds & Catacombs set.

Fungalmancer can be obtained through Kobolds & Catacombs card packs, or through crafting.

This minion potentially provides 6/6 worth of stats for 5 mana, 4 attack of which is capable of dealing damage immediately. However this card is much weaker without other minions to buff, and risks being a dead draw without having some board presence already. Fungalmancer is a great card for Zoo decks as well as Arena, where the value of the raw stats makes it highly useful.