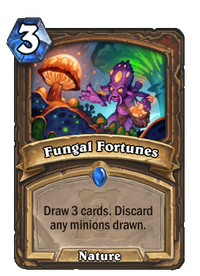 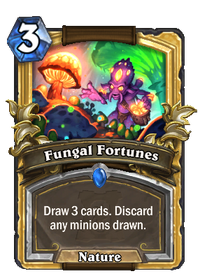 Far superior to a beanstalk boondoggle.

Fungal Fortunes is a rare druid spell card, from the Ashes of Outland set.

Three Mana drawing three cards itself is very powerful. For a spell heavy deck, it is likely to keep all three spell cards without discarding any. The card draw at turn three helps the player to hit the Ramp cards (eg, Breath of Dreams, Wild Growth,Overgrowth) to facilitate the play of the powerful cards like Glowfly Swarm and Exotic Mountseller to build huge board from no where, or play minions like Emerald Explorer for defense purpose.

For general Mulligan, this card is almost always a keep for the Spell Druid archetype.