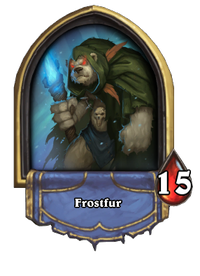 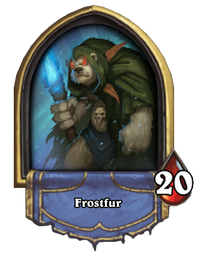 Frostfur is a boss that can be encountered during the Dungeon Run.

Frostfur has one of the easiest fights you can go against. The only thing her hero power does is freeze a minion for one turn which will only slow you down. While she has a lot of removal, board control guarantees a win. Keep the pressure on her, save your spells for removal, control the board, keep flooding the board with minions and then you win.

Frostfur
I told you kobolds to - oh - what have we here?

Frostfur
Oh no, none of that.
Stay there a moment.
Stay put.

Frostfur
<Shivering.>
Chilling!
You, too, embrace the cold?

Frostfur
That's how we handle things, in Winterspring.

Frostfur is unique to Hearthstone. She is a master of frost and uses her powers to deal with kobolds. The fact that she has white fur and claims to be from Winterspring implies she may be a member of the Winterfall tribe.