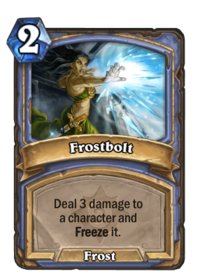 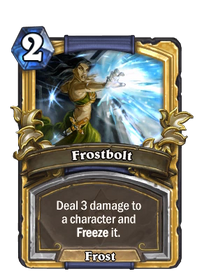 Deal 3 damage to a character and Freeze it.

It is customary to yell "Chill out!" or "Freeze!" or "Ice ice, baby!" when you play this card.

Frostbolt is a mage spell card, from the Basic set.

Two copies of Frostbolt are a reward for raising a mage to level 2.

Two Golden copies of Frostbolt are a reward for raising a mage to levels 40 and 42.

Frostbolt is uncraftable and cannot be crafted or disenchanted.

Frostbolt is a very useful direct damage spell in the mage's arsenal. Less powerful than Fireball, and less far-reaching than Arcane Explosion, Frostbolt fills a niche for finishing single targets with 2 or 3 health. Its freeze effect provides extra utility, useful for stopping higher-health minions in their tracks, until they can be properly disposed of. This also works against heroes, making it excellent for delaying a charging warrior or back-stabbing rogue from unleashing their latest weapon upon you.

Frostbolt works particularly well as a nuke when combined with Ice Lance, allowing mages to deliver devastating amounts of burst damage in a single turn.

Frostbolt is a Frost mage spell from World of Warcraft that deals direct damage and chills the target, slowing their movement by 50%.