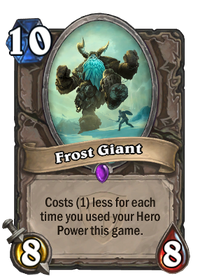 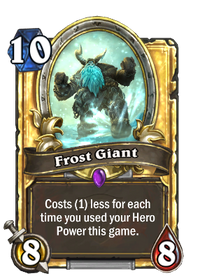 Costs (1) less for each time you used your Hero Power this game.

Don't ask him about the beard. JUST DON'T.

Frost Giant is an epic neutral minion card, from the Grand Tournament set.

Frost Giant can be obtained through The Grand Tournament card packs, or through crafting.

Example: Frost Giant generated by Unstable Portal will take into account any prior Hero Power uses and immediately have its cost reduced.[2]

This card works well in Inspire decks, or any deck built around heavy Hero Power use. Cards which let the player use their Hero Power more frequently (Maiden of the Lake, Fencing Coach, Garrison Commander, etc) can further help to reduce Frost Giant's cost. It is particularly useful for decks based around Genn Greymane, which can reduce the cost of Frost Giant quicker than other decks.

Ice giants (also referred as frost giants) primarily belong to the faction known as the Sons of Hodir. After his betrayal of the Pantheon, Thorim's brother, Loken, tricked him into betraying his ice giant allies by murdering his wife, Sif, and blaming it on the ice giant king. Thorim was enraged, striking out at his allies and then settling into a long stupor.

Many years later, Thorim discovered the truth. With the aid of adventurers serving the Sons of Hodir, Thorim recovered his weapon (Krolmir, Hammer of Storms) and his shattered armor, then brought war to his treacherous brother. However, it proved to be an elaborate ruse perpetrated by Loken to lure Thorim away from the Temple of Storms, where proximity to his dark master granted Loken the power to overcome Thorim's attack. Thorim and his proto-drake, Veranus, were captured and taken to "new dwellings". Both became bosses in Ulduar. 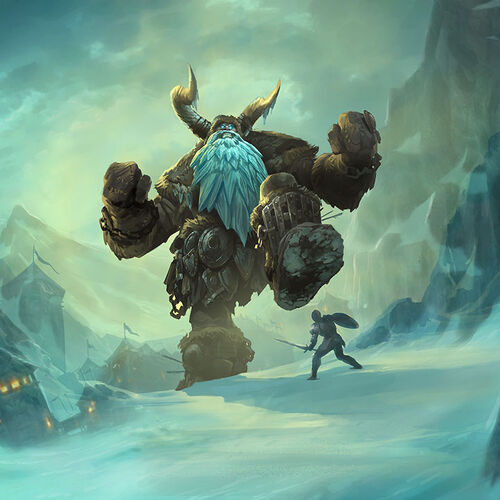