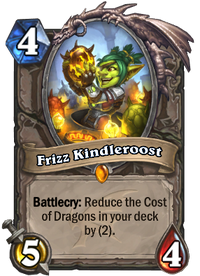 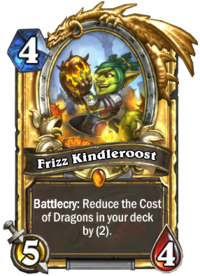 Battlecry: Reduce the Cost of Dragons in your deck by (2).

Frizz Kindleroost is a legendary neutral minion card, from the Descent of Dragons set.

Frizz Kindleroost can be obtained through Descent of Dragons card packs, through crafting, or as an Arena reward.

Frizz Kindleroost is best used with many Dragons in the deck. Similar to Prince Keleseth, Frizz can generate massive amounts of tempo if played early, especially if returned to hand and played multiple times, but becomes less effective as the game goes on.

Reno Mage can make use of Frizz with Kalecgos, Dragonqueen Alexstrasza, Malygos, Aspect of Magic, and Azure Explorer. Standard Handlock not only uses Frizz to generate tempo early on with Twilight Drake and Crazed Netherwing, but also uses Frizz to discount Malygos. With a discounted Malygos, Soulfire, and Nether Breath, Handlock can deal up to 16 points of direct damage in a single turn. Other Standard decks with Malygos also use Frizz for the same purpose.

Summon
Turn the incubators to eleven!
Attack
Fly, my pretties!

Frizz Kindleroost is original to Hearthstone. Frizz is likely a henchman under the employment of Dr. Boom. 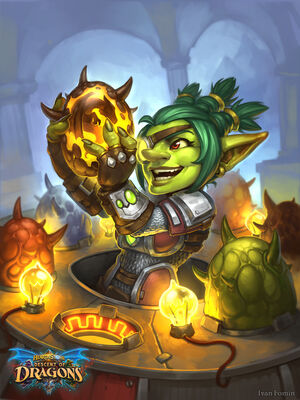