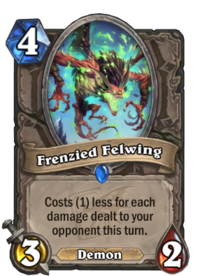 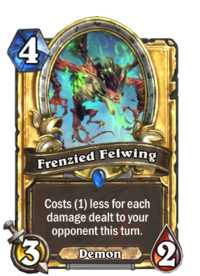 Costs (1) less for each damage dealt to your opponent this turn.

Frenzied Felwing is a rare neutral minion card, from the Galakrond's Awakening set.

Two copies of regular Frenzied Felwing are obtained by defeating George and Karl in Galakrond's Awakening's Chapter 4 of E.V.I.L. campaign.

Frenzied Felwing is an aggro card that can apply lots of pressure to your opponent. In particular, Face Hunter and Aggro Demon Hunter can make great use of this card, with their Hero Powers reducing the cost of this card 1 for 1, and both classes having access to cheap weapons to almost always guarantee damage. With an established board, it's very easy to reduce this minion's cost to 0.

Felbats or fel bats are a race of winged, gargoyle-like demons. The Burning Legion breeds them as flying mounts for their soldiers, but many felbats have also been enslaved by the Illidari as mounts.