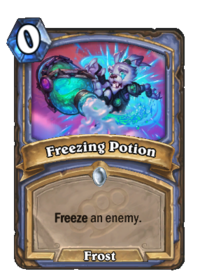 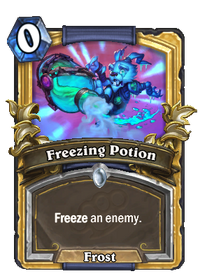 This is delicious! Oh no. BRAIN FREEEEEEEZE!

Freezing Potion is a common mage spell card, from the Mean Streets of Gadgetzan set.

Freezing Potion can be obtained through Mean Streets of Gadgetzan card packs, or through crafting.

Even at 0 mana, a spell that only Freezes a character but does nothing to remove it is too weak for inclusion. You will only benefit from this if stalling your opponent for one turn is sufficient to win the game, or to handle the board.

This card does enable some specific synergies. Freezing Potion plus Shatter is a very cheap (2 mana) hard removal; combining Freezing Potion with Cryomancer can give you a 7/7 body for 5 mana. However, decks built around such synergies will usually prefer stronger freezing cards, such as Frost Nova, Frostbolt, Water Elemental, or Cone of Cold.

In decks that try to cast as many spells as possible in a single turn, for instance to maximize the Fireballs generated by Archmage Antonidas, this card could be included for its cost only, without consideration of its effect.