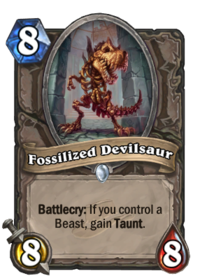 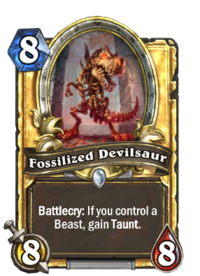 Battlecry: If you control a Beast, gain Taunt.

This was the only job he could get after the dinosaur theme park debacle.

Fossilized Devilsaur is a common neutral minion card, from the League of Explorers set.

Two copies of regular Fossilized Devilsaur are obtained by defeating Skelesaurus Hex, the first boss in The League of Explorers's fourth wing, the Hall of Explorers.

As a Wild format card, both regular and golden versions of Fossilized Devilsaur can also be crafted for the following amounts:

If the card condition is met this resembles a neutral Ironbark Protector available to all classes. Because the condition is Beast-related the Fossilized Devilsaur still fits hunter and druid decks best. However, as druid already has Ironbark Protector (which is superior to Fossilized Devilsaur, even in a Beast deck) there is little reason for druid to use it at all, making it effectively of exclusive use to hunters.

The Lich King has the same stats and Taunt and also generates powerful cards at the end of your turn.

The Fossilized Devilsaur was a skeleton on display in the Hall of Explorers, before being animated by some unknown magic, likely thanks to Arch-Thief Rafaam.[1]

Devilsaurs are huge, theropod dinosaurs found in small numbers only in Un'Goro Crater, Eco-Dome Farfield in Netherstorm, Drak'Tharon Keep, Sholazar Basin and several islands in the South Seas including the Isle of Giants.

Devilsaurs are among the largest predators to ever walk Azeroth. While most died out long ago, some thrive in isolated pockets to this day. There is much speculation about the purpose of the devilsaur's degenerate front arms. One theory is that they help devilsaurs rise to a standing position; another theory suggests that the arms titillate females. More observation is necessary. 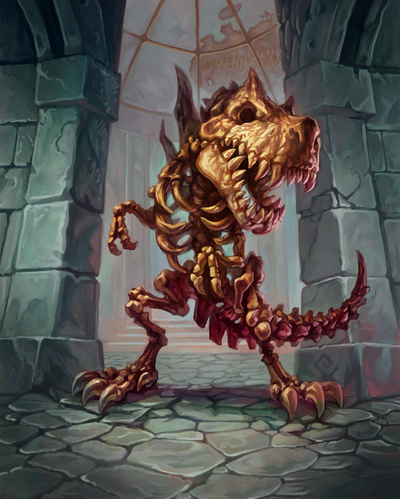