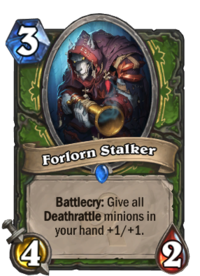 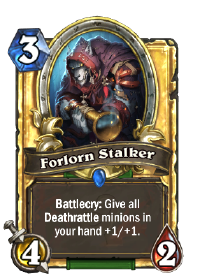 Battlecry: Give all minions with Deathrattle in your hand +1/+1.

He's going to leave the dying up to you, if that's cool.

Forlorn Stalker is a rare hunter minion card, from the Whispers of the Old Gods set.

Forlorn Stalker can be obtained through Whispers of the Old Gods card packs, or through crafting.

This minion is ideal for a Hunter deck focused around Deathrattles. Aside from neutral Deathrattle minions such as Eggnapper or Leper Gnome, there are a number of Hunter-specific minions such as Savannah Highmane and Fiery Bat which can benefit greatly from a +1/+1 boost. Forlorn Stalker's stats are average for its mana cost, which is why there should be at least one Deathrattle minion in your hand. If used with Brann Bronzebeard, this could provide multiple minions with a hefty +2/+2 power-up; if played with a large hand, this can result in totally securing the board within the next two turns as these minions are summoned.

Summon
The beasts betrayed me.

Attack
For The Eye!

This worgen seems to be a hunter of some kind. Judging by his attack quote, he serves C'Thun, while his effect indicates a special relationship with death. 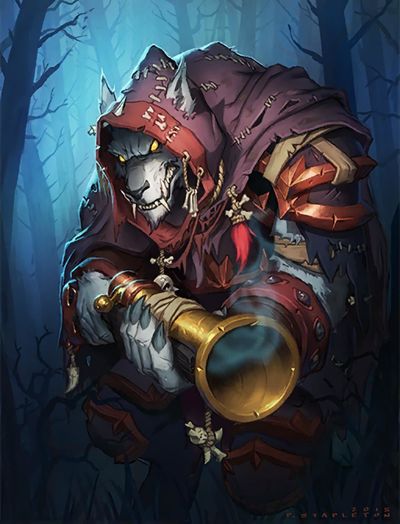