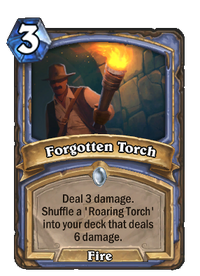 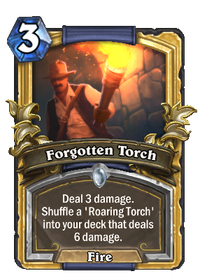 Deal 3 damage. Shuffle a (6 damage for 3 mana card) into your deck.

Why does a forgotten torch turn into a roaring torch with no provocation? It's one of life's many mysteries.

Forgotten Torch is a mage spell card, from the League of Explorers set.

Two copies of regular Forgotten Torch are granted to the player automatically upon purchasing the first wing of the adventure The League of Explorers.

As a Wild format card, both regular and golden versions of Forgotten Torch can also be crafted for the following amounts: 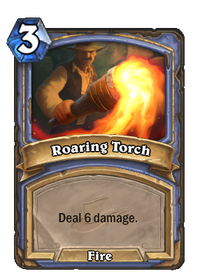 This card starts off as a weaker Frostbolt but can reward you with a cheaper version of Fireball later on in the game. Freeze Mage decks can greatly benefit from this card as this gives them something to help control the board in the early game as well as another card later to use in their finisher combo.

If you are playing a deck with Reno Jackson, Kazakus or Inkmaster Solia and acquire addittional Forgotten Torches, take care to not shuffle multiple Roaring Torches into your deck as this will deactivate the Battlecries of those minions.