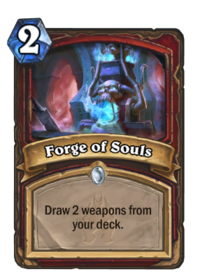 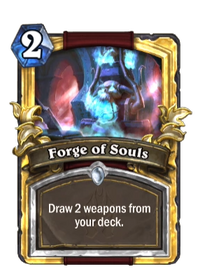 Draw 2 weapons from your deck.

Powerful weaponry forged by Bronjahm, the Godfather of Souls.

Forge of Souls is a common warrior spell card, from the Knights of the Frozen Throne set.

Forge of Souls can be obtained through Knights of the Frozen Throne card packs, or through crafting.

Compared to other "draw 2" mechanics, such as Arcane Intellect, Mimic Pod, and Ice Fishing, this card is Warrior's own cheap draw engine. However, the nature of weapons means that you want to play them over the course of many turns for maximum value, limiting the potential of this card since you can only use one of the cards it draws immediately.

Forge of Souls can be used to tutor important weapons like Woecleaver and Wrenchcalibur as win conditions. It competes with Corsair Cache as a weapon tutor, which draws the weapon and gives it a handy buff to help maintain tempo while avoiding the somewhat redundant second draw.

Playing this in a deck with Furnacefire Colossus helps you get more value out of your Colossus.

This card depicts a runeforge.

A runeforge is a special type of forge used by death knights to emblazon their weapon with runes.

"Forge of Souls" is also the name of a dungeon in the Frozen Halls section of Icecrown Citadel. The dungeon houses the Scourge's horrific "Soul Grinder" engines and two bosses: Bronjahm and the Devourer of Souls. Besides having the same name, however, Hearthstone's Forge of Souls does not appear to have any explicit connection to the dungeon.