Forest for the Weary 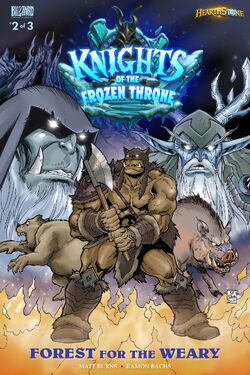 "The Pompous Thespian regales the Hearthstone Tavern with another cautionary tale of forbidden power, this one revolving around the hunter Rexxar. Something is amiss in the forests he calls home. Plants and animals alike have fallen to a mysterious corruption. When Rexxar discovers the source of this darkness, he must decide how much he is willing to sacrifice to stand against it."[1]

Forest for the Weary is the second issue of a series of official Hearthstone: Knights of the Frozen Throne web comics. It was released on July 22nd, 2017 and focuses on Deathstalker Rexxar, Malfurion Stormrage and Gul'dan.

The script was written by Matt Burns, while the illustrations were created by Ramon Bachs.

The comic begins where Undeath Conquers All left off, with the Pompous Thespian entertaining a group of patrons in the Hearthstone tavern. His audience has grown to include, among others, what appear to be an Evil Heckler, a Dalaran Mage, a Grimestreet Smuggler and a Southsea Captain. The thespian addresses the smuggler and asks her what compels her to seek the Frozen Throne, with the tauren replying that she needs to protect what's hers. The night elf begins telling a new tale of a noble hero who vowed to do anything to safeguard his land, but he is interrupted by the fortune-teller from the Whispers of the Old Gods trailer, who claims she can read the future. The night elf continues by telling of Rexxar, master of the wilds, who one day discovered that a great evil had descended on his forest home — the air was frigid, and the forests and everything that walked within them were dying. The fortune-teller interrupts again by saying that choosing Malfurion Stormrage as the story's villain is a bold choice. The tavern patrons rebuke her by saying that her powers have failed her, since having the noble Malfurion as the bad guy makes no sense. The thespian continues by revealing that it actually was Malfurion, but not as the listeners knew him, for he had become pestilent, a corruptor of nature commanding legions of bugs. Rexxar fired his bow at the corrupt druid, but the insects chewed apart his arrows and poisoned his companions, Misha and Huffer. With sorrow in his heart, the hunter swore he would do anything for the power to do what was right.

Suddenly, the shadow of a twisted throne fell over him, but in its place was only the stranger Gul'dan, who had just what Rexxar wished for. All that the warlock asked in return was a single life. Rexxar accepted, and was resurrected as Deathstalker Rexxar. He was taught by Gul'dan how to grant his beloved animals immortality and unholy power. The thespian is interrupted when the listeners begin suggesting that Rexxar used his powers to stitch together various animals into horrifying Zombeasts. Although the night elf tells the listeners to not get carried away, he is swayed by the donations of gold coins and continues by telling how the most fearsome Zombeast of all was the dreaded "sharkbear". Deathstalker Rexxar and his Zombeasts marched against Malfurion's forces and defeated the corrupt druid, but just as Rexxar moved in for the killing blow, Malfurion revealed that he himself had simply been trying to protect the forests as well before being swayed by the promises of a twisted throne: he and Rexxar had fallen victim to the same force.

The thespian finishes his tale by saying that no one knows what happened to the "vampire orc" Gul'dan, but that it was rumored that even he was merely acting on the orders of a greater evil. He then turns to the tauren smuggler once more and urges her to take his tale as a warning. However, the tauren starts threatening the night elf in the belief that he wants to have the sharkbear all to himself. Despite the thespian's protests that there is no sharkbear and that he just made that up, the tauren lifts him up by the neck and orders him to tell her everything he knows about the sharkbear, lest things get "very unpleasant". The comic finishes with the Evil Heckler questioning the vampire orc's motives, the Dalaran Mage asking where Rexxar managed to find a shark in a forest, and the Southsea Captain replying "You've never seen a river shark, mate?"