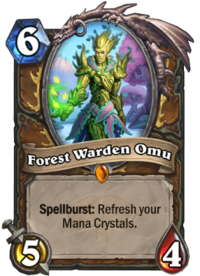 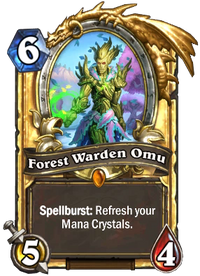 She wishes all things could grow and flourish at Scholomance. If only she knew…

For other representations of Omu, see Omu (disambiguation).

Forest Warden Omu can be obtained through Scholomance Academy card packs, through crafting, or as an Arena reward.

This card is best paired with lower cost spells like Pounce or Claw to get the most out of her effect, followed by a high cost card like Survival of the Fittest as she will most likely not survive to another turn. She also has good synergy with Kael'thas Sunstrider, if either survives a turn.

Germination will create a copy of Omu with Spellburst active, letting you refresh your Mana Crystals a second time.

Summon
In time, you, too, will bloom.
Effect triggering
Everbloom!
Attack
Room to grow!

Forest Warden Omu is unique to Hearthstone. Omu is a botani.

The botani are a race of intelligent, bark-skinned humanoids native to Draenor. They are members of the group of creatures known as the Primals, who wage an eternal war against the stone giants known as the Breakers and seek to establish dominance over them and all other organic life. The botani fervently serve the enormous genesaur, which they worship as gods, and are notorious for their ability to infest humanoid races, turning them into shambling slaves.