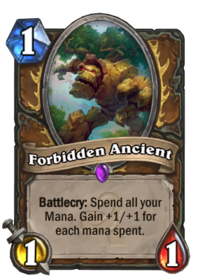 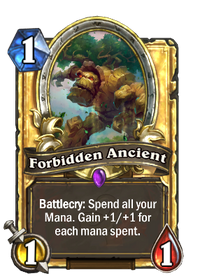 Battlecry: Spend all your Mana. Gain +1/+1 for each mana spent.

This Ancient was banned from the local tavern after tucking a 'Dr. Boom' up its sleeve.

Forbidden Ancient is an epic druid minion card, from the Whispers of the Old Gods set.

Forbidden Ancient can be obtained through Whispers of the Old Gods card packs, or through crafting.

Example: If you have 5 mana and play this card, first you pay its mana cost and then this card's Battlecry consume your remaining 4 mana, resulting in a 5/5 minion.
Example: Playing this minion in conjunction with Brann Bronzebeard has no additional effect, since its first Battlecry will consume all of your remaining mana, leaving you with 0 remanining mana for the second Battlecry.

Because this minion usually can be played every turn, it fits well in most druid decks, in general in "Curve druid" decks that involve gaining mana crystals faster than your opponent (Wild Growth, Nourish, etc.). There you can simply adjust the amount of mana you are going to make available for this minion, by giving yourself another mana crystal the preliminary turn.