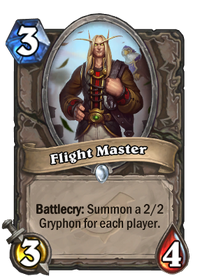 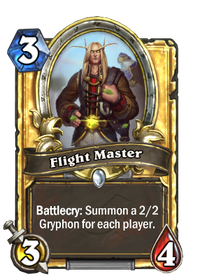 Battlecry: Summon a 2/2 Gryphon for each player.

Your gryphon will be summoned following a brief safety demonstration.

Flight Master is a common neutral minion card, from the Rise of Shadows set.

Flight Master can be obtained through Rise of Shadows card packs, through crafting, or as an Arena reward. 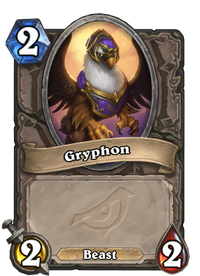 This minion has premium stats and a symmetrical effect. You should prioritize trading into the opponent's Gryphon after this is played, because otherwise they'll be able to attack with the summoned minion before you do. You can also take advantage of the Battlecry using board-wide buffs like Power of the Wild and Blessing of the Ancients.

One use for Flight Master is to ruin Big Priest's Resurrection pool while summoning decent stats for yourself.

The card also sees merit in Wild, where decks like Odd Rogue can use their weapon on a previous turn to instantly get rid of the opponent's Gryphon. This in turn gives you 5/6 worth of stats for only 3 Mana. Similarly, decks like Odd Mage can use their hero power to destroy the Gryphon, although it's much slower since you can't prepare to kill the Gryphon beforehand.

Summon
Hop on! We're going for a ride.
Attack
The sky is ours!

Flight masters are World of Warcraft NPCs that are found in almost all cities and settlements and allow players access to flight paths, one of the primary means of transportation in Azeroth and beyond. Players can speak to flight masters to purchase a ride on a flying mount to other flight points elsewhere on the continent. Most flight points need to be manually "discovered" by first traveling to a flight point and speaking to its flight master in order to unlock traveling to and from that area.

A flight master is an NPC who offers a character the opportunity to obtain flight paths and to fly to other flight masters through those flight paths. They can usually be found at a roost or nest of flying transportation mounts, which are often either bats, gryphons, hippogryphs, wyverns, or dragonhawks — usually depending on the race of the flight master. To discourage players from attacking flight masters, they are usually max level elites (rarely non-elites) and spawn two additional aggressive max-level elite beasts of the appropriate transportation animal when attacked by opposite faction players.