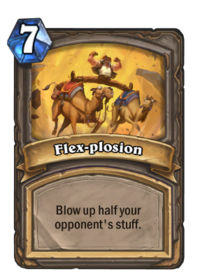 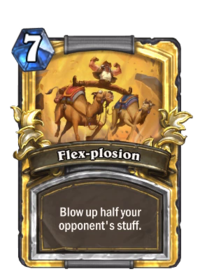 Blow up half your opponent's stuff.

Flex-plosion is an uncollectible neutral spell card, from the Saviors of Uldum set. It can be drafted as a treasure in a Tombs of Terror run.

Flex-plosion is the second rarest treasure (after Sack of Lamps) in the adventure.

The fact that it destroys half of the opponents' health and mana as well makes it extremely useful when against the Plague Lord bosses. Since the damage dealt is half of the boss' remaining health instead of its maximum health, the value of the card's use will be significantly greater when used against a boss with full health, potentially dealing up to 150 damage to the Plague Lords at full health.