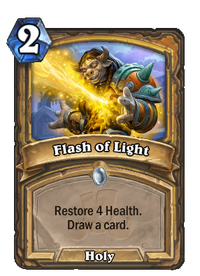 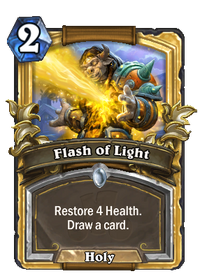 Flash of Light is a common paladin spell card, from the Rastakhan's Rumble set.

Flash of Light can be obtained through Rastakhan's Rumble card packs, or through crafting.

Flash of Light is essentially a version of Holy Light that doesn't restore as much Health but compensates by drawing a card, potentially making it a useful drawing tool in a healing-focused paladin deck. Combo decks can also use it to cheaply cycle cards while also restoring a small amount of health, improving the speed of their deck and helping against aggro.