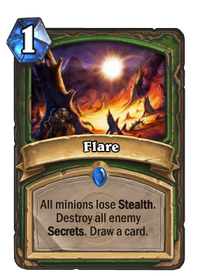 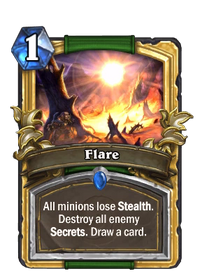 Not only does it reveal your enemies, but it's also great for parties!

Flare is a rare hunter spell card, from the Classic set.

Flare can be obtained through Classic card packs, through crafting, or as an Arena reward. Regular Flare can also be obtained through the Highest Rank Bonus chest at the end of a Ranked season, or as a first-time reward for first time reaching Silver 10 or Gold 10 in Ranked mode.

Flare is a card with devastating effects in the right situation. Against mages, hunters, rogues or paladins, Flare's unique ability to destroy Secrets can cripple their strategy. It can also be use pre-emptively if going for the kill with a large minion to prevent the use of defensive secrets such as Ice Block, Eye for an Eye and Misdirection.

Flare also has the ability to remove Stealth, making it useful for against minions such as Shade of Naxxramas, Stranglethorn Tiger and Ogre Ninja, as well as in response to effects such as Conceal.

Flare is a hunter ability from World of Warcraft which allows the hunter to fire a small flare into a targeted area. The flare remains for 20 seconds, during which time it will expose any hidden, stealthed or invisible targets within 10 yards. Although it has no destructive abilities, like in Hearthstone Flare is the bane of anyone relying on secrets and concealment, and is one of the only ways to counteract these effects. 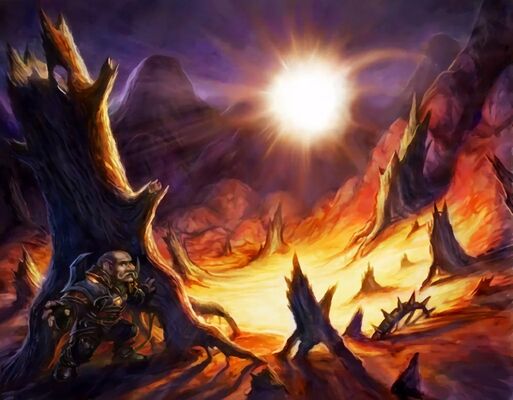