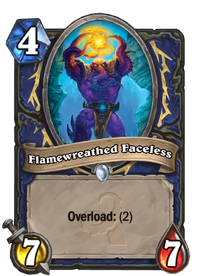 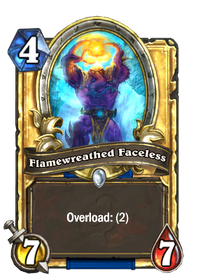 Flamewreathed Faceless is a common shaman minion card, from the Whispers of the Old Gods set.

Flamewreathed Faceless can be obtained through Whispers of the Old Gods card packs, or through crafting.

Flamewreathed Faceless is an incredibly strong minion if played on turn 4. Very few classes in Hearthstone have the tools to effectively deal with such a huge threat during the early to mid game. If not properly answered, this minion has the potential to deal large amounts of damage to the opponent's hero very quickly, or make extremely efficient trades.

It is worth noting that the Overload effect when played on turn 4 will have the effect of delaying the all-important Doomhammer which most aggressive Shaman players will aim to drop on turn 5. While this card will almost always delay Doomhammer, the threat of such a destructive and difficult-to-remove minion will usually be worth it.

Additional synergies exist with Overload-removing effects such as Lava Shock or Eternal Sentinel.

This card is likely to fare poorly against most Midrange Hunter archetypes, as the existence of Freezing Trap and Hunter's Mark would represent too large a tempo loss for the Shaman player if those cards were activated against Flamewreathed Faceless.

In Arena, the common rarity of the card combined with the high intrinsic value of this card's stats ensures that it will be considered an extremely good pick.

Flamewreathed Faceless is a faceless one.