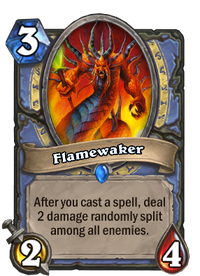 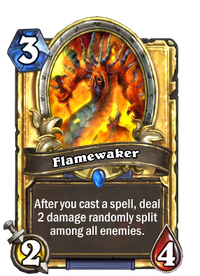 After you cast a spell, deal 2 damage randomly split among all enemies.

Flamewakers HATE being confused for Flamewalkers. They just wake up fire, they don’t walk on it. Walking on fire is CRAZY.

Flamewaker is a rare mage minion card, from the Wild Event set.

For information about the original version of this card, see Flamewaker.

Two non-golden copies of Flamewaker are automatically included in all players' collections during these events:

Both non-golden and golden Flamewaker are uncraftable and cannot be crafted or disenchanted.