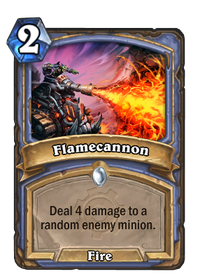 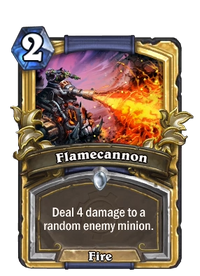 Calling something a flamecannon really doesn't do much to distinguish it from other goblin devices.

Flamecannon is a common mage spell card, from the Goblins vs Gnomes set.

Flamecannon can be obtained through Goblins vs Gnomes card packs, or through crafting.

Similar to Flamestrike, it is best when you have enough mana for the Hero Power Fireblast to take down a 5-Health minion.

While stronger than Frostbolt, this card will rarely hit for its full damage, either because you missed your intended target, or because you burned it on a small minion early out of fear that an even smaller minion would come out later and make it a bigger waste. Since this card's target is random, it is far more reliable with fewer enemy minions on the field. With a single enemy minion it is effectively a targeted 4 damage for only 2 mana. This makes it a reliable early game option for stalling board development.

It works well with Sorcerer's Apprentice to take down minions out of Apprentice's range, while the discounted cost makes it easier continue chaining spells for Mana Cyclone. This card is particularly useful for mages relying on spells to clear the board, and a good counter against Stealth minions.